WHAT IS PROPAGANDA: 22 Propaganda Techniques Everyone Needs to Know 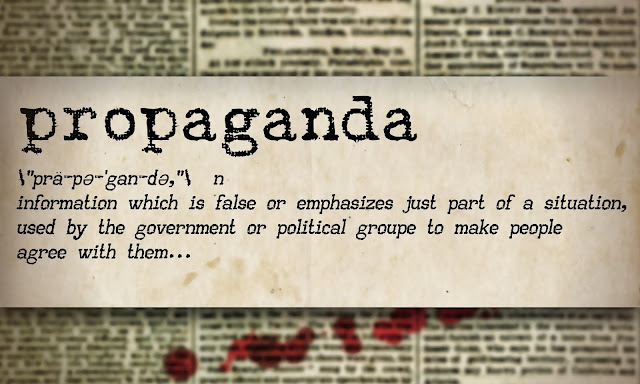 Let the consumer and the voter beware. Yes, politics and marketing have a lot in common.
The following list is a primer that will help you become a smart consumer and a wise voter. At the end of this list, I've included a video lecture that summarizes propaganda and also provides a history. Study it and do your own research. Accurate information will keep you from being ripped off and just might help keep you stay free(or realize you are not!).

(It should be noted that all of the following share a commonality: dishonesty or outright lies. It should also be mentioned that 'The Big Lie' is also a propaganda technique sometimes used by dishonest politicians and marketers and that False Equivalence or false balance may be the most deceptive of all the propaganda techniques because it sounds true on its face.)


1. NAME CALLING or STEREOTYPING: The name-calling technique links a person, or idea, to a negative symbol. The propagandist who uses this technique hopes that the audience will reject the person or the idea on the basis of the negative symbol, instead of looking at the available evidence.


2. VIRTUE WORDS or GLITTERING GENERALITY: These words are used to dupe us into accepting and approving of things without examining the evidence carefully. Examples: "Natural", "Democratic", "Organic", "Scientific", "Ecological", "Sustainable".


3. DEIFICATION: This is when an idea is made to appear holy, sacred, or very special and therefore above all law. Any alternative or opposing points of view are thereby given the appearance of treason or blasphemy. Examples: "God-given right to...", "Mother Earth", "Gia".


4. TRANSFER(association): Transfer is when a symbol that carries respect, authority, sanction, and prestige is used along with an idea or argument to make it look more acceptable. Examples: American Flag, University Seal, Medical Association Symbol (or something that looks like it). This method is also called GUILT- or VIRTUE-BY-ASSOCIATION.


5. TESTIMONIAL: When some respected celebrity (or alternatively someone generally hated) claims that an idea or product is good (or bad). This technique is used to convince us without examining the facts more carefully.


6. PLAIN FOLKS: This is a way that a speaker convinces an audience that an idea is good because they are the same ideas of the vast majority of people like yourself. Examples: "This is the will of the People", "Most Americans...". Another example would be when the speaker tells a story about a family or people that are "just like you" to reinforce the speaker's point of view.


7. BANDWAGON: This common propaganda method is when the speaker tries to convince us to accept their point of view or else we will miss out on something really good. The Band-Wagon technique is often used in advertising. Examples: "This is the wave of the future", "Be the first on your block", "Act Now!". You might ask yourself "What if I was the only one on my block because no one else was interested (duped)?".


8. ARTIFICIAL DICHOTOMY: This is when someone tries to claim there are only two sides to an issue and that both sides must have an equal presentation in order to be evaluated. This technique is used to dupe us into believing there is only one way to look at an issue, when in fact there may be many alternative viewpoints or "sides". Like most propaganda techniques it simplifies reality and therefore distorts it, often to the advantage of the speaker. A classic example is the "intelligent design" versus "evolution" controversy.


9. HOT POTATO: This is an inflammatory (often untrue) statement or question used to throw an opponent off guard, or to embarrass them. Examples "Have you stopped beating your spouse", "When will you pay the taxes you owe?" The fact that it may be utterly untrue is irrelevant because it still brings controversy to the opponent.


10. STALLING or IGNORING THE QUESTION: This technique is used to play for more time or to avoid answering a pointed question. Examples: "More research is needed...", "A fact-finding committee is working on this issue..." "I am calling for an investigation on this failure.." When asked about a tax increase possibility a senator replies: "I have always met the obligations I have to those I represent."


11. LEAST-OF-EVILS is used to justify an otherwise unpleasant or unpopular point of view. Example: '"War is hell but appeasement leads to worse disasters".


12. SCAPEGOAT: This is often used with Guilt-by-association to deflect scrutiny away from the issues. It transfers blame to one person or group of people without investigating the complexities of the issue. Examples: "George W. Bush got us into Iraq", "President Reagan caused the national debt".


14. DISTORTION OF DATA or OUT OF CONTEXT or CARD STACKING or CHERRY PICKING: This technique is used to convince the audience by using selected information and not presenting the complete story. Examples: "A study was done that showed eating peanut butter causes liver cancer" (the fact that later the study was later shown to be flawed or funded by the peanut butter haters and therefore suspect, is not revealed). A variation would be "Raising the speed limit to 65 mph resulted in many fewer traffic fatalities". Such statements need to be checked with how many people were driving before and after the change in speed limit. Fewer people may be driving after the speed limit change, even though the fatality rates (deaths per 100,000) may be higher, leading to the overall result of fewer fatalities.


15. WEAK INFERENCE (or False Cause): Weak inference is when a judgment is made with insufficient evidence, or that the conclusion does not necessarily follow from the evidence given. For example, Ducks and geese migrate south for the winter, therefore all waterfowl migrate south for the winter. Or, most rich folks vote republican, therefore most people who vote republican are rich.


16. FAULTY ANALOGY: This is when a comparison is carried too far. Example: "The economy is following the same path as right before the great depression, therefore we will experience a stock market crash soon!" SLIPPERY SLOPE would be an example of a faulty analogy. The slippery slope makes the argument that a shift in one direction will continue to lead to extremes (ex. smoking pot will lead to heroin addiction). It is not necessarily so.


17. MISUSE OF STATISTICS: Some examples: Average results are reported, but not the amount of variation around the averages. A percent or fraction is presented, but not the sample size as in "9 out of 10 dentists recommend...". Absolute and proportional quantities are mixed as in "3,400 more robberies occurred in our town last year, whereas other cities hand an increase of less than one percent". Graphs are used that, by chopping off part of the scale or using unusual units or no scale, distort the appearance of the result. Results are reported with misleading precision. For example, representing 13 out of 19 students as 68.42105 percent.


18. FEAR: "Of course the people don't want war. But after all, it's the leaders of the country who determine the policy, and it's always a simple matter to drag the people along whether it's a democracy, a fascist dictatorship, or a parliament, or a communist dictatorship. Voice or no voice, the people can always be brought to the bidding of the leaders. That is easy. All you have to do is tell them they are being attacked, and denounce the pacifists for lack of patriotism, and exposing the country to greater danger."-- Herman Goering at the Nuremberg trials (http://www.snopes.com/quotes/goering.htm)


19. Ad hominem ATTACK (also called Deflection): You attack the messenger, instead of the argument or evidence that is presented.


21. Preemptive Framing: "Frame an issue before other people get a chance to" (George Lakoff - On the Media Jan 2017) Ex. "The only reason the hacking of the poorly defended DNC (Democratic National Committee) is discussed, is that the loss by the Dems was so big that they were totally embarrassed" -Donald Trump. When in fact the Dems did not lose big, nor was it their fault that they got hacked.


22. Diversion: When a major issue comes up that is embarrassing or threatening, so a diversion is created so attention is directed away from the issue.