The Pain of Silence 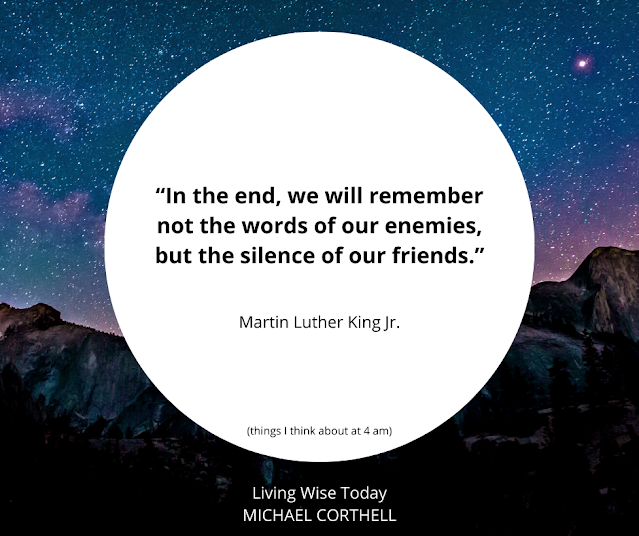 We know that our enemies will mistreat us, acting in unkind ways. We guard against being disrespected and shield ourselves against hateful words that are thrown at us like rocks — that’s what our enemies do, they try to hurt us.

We are sometimes caught off guard by the actions of our enemies, but these actions are never unexpected. Our enemies wouldn’t be enemies if they were nice and supportive...right?

Friends on the other hand, and by friends I mean all good people, are a different story all together. We expect them to do right, to have our backs.

Otherwise good people often enable bullies and even seditionists to thrive by remaining silent in the face of the bad person's actions. It's either fear or apathy but the result is the same — silence is consent. Never forget that or this:

“Silence in the face of evil is itself evil: God will not hold us guiltless.
Not to speak is to speak.
Not to act is to act.”
― Dietrich Bonhoeffer*

* Dietrich Bonhoeffer was arrested in April 1943 by the Gestapo and imprisoned at Tegel prison for one and a half years. Later, he was transferred to Flossenbürg concentration camp. After being accused of being associated with the 20 July plot to assassinate Adolf Hitler, he was quickly tried, along with other accused plotters, including former members of the Abwehr (the German Military Intelligence Office), and then hanged on 9 April 1945 as the Nazi regime was collapsing.