The Paradox of Tolerance 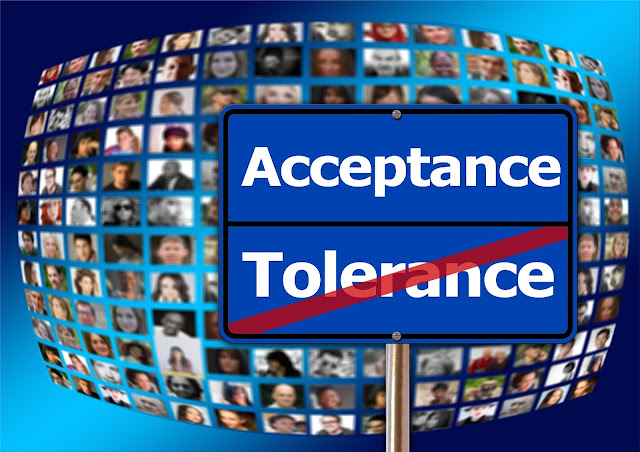 Is there a real difference?
by Michael Corthell
The paradox of tolerance states that if a society is tolerant without any limits, its ability to be tolerant is eventually co-opted or destroyed by the intolerant. Karl Popper described it as the seemingly paradoxical idea that in order to maintain a tolerant society, the society must be intolerant of intolerance. (see laws against hate speech)
Tolerance as defined by Dictionary.com says ''a fair, objective, and permissive attitude toward those whose opinions, practices, race, religion, nationality, etc., differ from one’s own; freedom from bigotry''.
Acceptance is defined in the same dictionary as ''favorable reception; approval; favor''. So we can see that there is a big difference between the two.

Many don't like the word tolerance. There’s something about it that makes us think 'putting up with' or 'dealing with.' Saying, ''I’m tolerant of Islam,'' can be interpreted as, 'I put up with Muslims.'

But, this is probably not what most people mean when they say they’re tolerant of certain people. However, that's what it sounds like to many people and is therefore seen as a negative. We tolerate the heat in Arizona. We tolerate things that are irksome, things that we can't change but toleration when applied to people can be seen as unaccepting of their humanity.

Tolerance' inherent permissive nature, says ''I’m allowing this to happen.'' Acceptance, with its inclusion of approval, says ''I approve of this or this person.'' This distinction between tolerance of something, and the acceptance of something is very important as we shall see when we dig into the 'paradox of tolerance'.
The 'Paradox of Tolerance'
Karl Popper: ''Unlimited tolerance must lead to the disappearance of tolerance. If we extend unlimited tolerance even to those who are intolerant, if we are not prepared to defend a tolerant society against the onslaught of the intolerant, then the tolerant will be destroyed, and tolerance with them.—In this formulation, I do not imply, for instance, that we should always suppress the utterance of intolerant philosophies; as long as we can counter them by rational argument and keep them in check by public opinion, suppression would certainly be most unwise. But we should claim the right to suppress them if necessary even by force; for it may easily turn out that they are not prepared to meet us on the level of rational argument, but begin by denouncing all argument; they may forbid their followers to listen to rational argument, because it is deceptive, and teach them to answer arguments by the use of their fists or pistols. We should therefore claim, in the name of tolerance, the right not to tolerate the intolerant.''
In context, Popper's reluctant acceptance to use suppression when all else has failed applies only to the state in a liberal democracy with a constitutional rule of law that must be just in its foundations, but will necessarily be imperfect.

Thomas Jefferson had already addressed the idea of a tolerant society in his first inaugural speech, concerning those who might want to destabilize the United States and its unity, saying, "let them stand undisturbed as monuments of the safety with which error of opinion may be tolerated where reason is left free to combat it. (what do you think of that?)
The paradox of tolerance is important in the discussion of what, if any, boundaries are to be set on freedom of speech.

To allow freedom of speech to those who would use it to eliminate the very principle upon which that freedom relies is indeed paradoxical.

Michel Rosenfeld, in the Harvard Law Review in 1987, stated: "it seems contradictory to extend freedom of speech to extremists who, if successful, ruthlessly suppress the speech of those with whom they disagree.

Rosenfeld also points out that the Western European democracies and the US have opposite approaches to the question of tolerance of hate speech, in that where most Western European nations place legal penalties on the circulation of extremely intolerant or fringe political materials (e.g. holocaust denial) as being inherently socially disruptive or inciting of violence, the US has ruled that such materials are in and of themselves protected by the principle of freedom of speech and thus immune to restriction, except when calls to violence or other illegal activities are explicitly and directly made.

Bottom-line? American will be revisiting free speech limitations in the near future by necessity. And tolerance v. acceptance as well.
________________________________
The Tolerance Paradox Explained (Karl Popper)
Can too much toleration be a negative thing? The tolerance paradox claims that to follow true and pure toleration in a society will inevitably lead to an intolerant and dangerous environment. Watch as George and John discuss.
Labels: Acceptance tolerance