Almost Everything You Think You Know About Addiction is WRONG 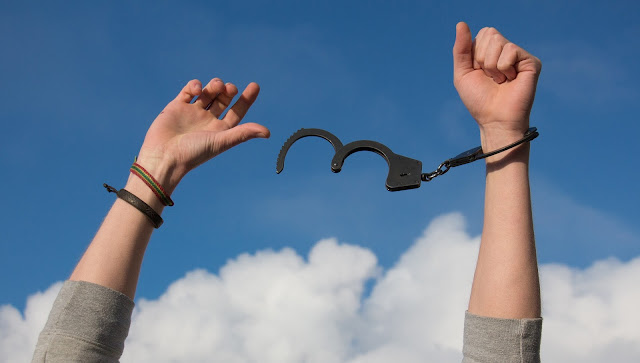 First, before you read this article and watch the video: People dealing with an addiction may lie to cover up addictive behavior for a variety of reasons, so don't take it personally. It's part of the disease of substance abuse or any addictive behavior including gambling. People who are addicted are slaves to their addiction and a slave must obey his or her 'master'.
by Michael Corthell
Yes, as it turns out, almost everything we know about addiction to substances is wrong, in fact most of what we do for, and to addicts is the exact OPPOSITE of what we should be doing.

First, read how addicts experience the hells created by addiction, then watch the video about the true nature of the disease and what we should be doing about it.
Not all quotes about substance abuse can be purely inspirational. They may not reflect the positive side of recovery in the world of addiction, and they may not make us feel good. But once we look closely at what is being said, and why it is being said, then we can start to understand that addictive behavior while there are many commonalities, each sufferer has their own take on addiction, and that it offers a perspective that is absolutely positive and can inspire others. 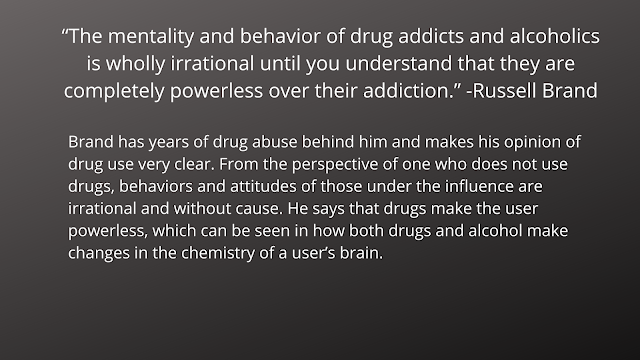 Most of the quotes below are not full of love and encouragement, rather they speak a truth that is important for those who need to seek treatment or those who do not fully understand what drug addiction is.

“I have absolutely no pleasure in the stimulants in which I sometimes so madly indulge. It has not been in the pursuit of pleasure that I have periled life and reputation and reason. It has been the desperate attempt to escape from torturing memories, from a sense of insupportable loneliness and a dread of some strange impending doom.”
― Edgar Allan Poe

“I admire addicts. In a world where everybody is waiting for some blind, random disaster or some sudden disease, the addict has the comfort of knowing what will most likely wait for him down the road. He's taken some control over his ultimate fate, and his addiction keeps the cause of his death from being a total surprise.”
― Chuck Palahniuk

“Reality is just a crutch for people who can't handle drugs.”
― Robin Williams

“Even as a junkie I stayed true [to vegetarianism] - 'I shall have heroin, but I shan't have a hamburger.' What a sexy little paradox.”
― Russell Brand

“The question is frequently asked: Why does a man become a drug addict?

The answer is that he usually does not intend to become an addict. You don’t wake up one morning and decide to be a drug addict. It takes at least three months’ shooting twice a day to get any habit at all. And you don’t really know what junk sickness is until you have had several habits. It took me almost six months to get my first habit, and then the withdrawal symptoms were mild. I think it no exaggeration to say it takes about a year and several hundred injections to make an addict.

The questions, of course, could be asked: Why did you ever try narcotics? Why did you continue using it long enough to become an addict? You become a narcotics addict because you do not have strong motivations in the other direction. Junk wins by default. I tried it as a matter of curiosity. I drifted along taking shots when I could score. I ended up hooked. Most addicts I have talked to report a similar experience. They did not start using drugs for any reason they can remember. They just drifted along until they got hooked.

If you have never been addicted, you can have no clear idea what it means to need junk with the addict’s special need. You don’t decide to be an addict. One morning you wake up sick and you’re an addict. (Junky, Prologue, p. xxxviii)”
― William S. Burroughs

“...most substance-addicted people are also addicted to thinking, meaning they have a compulsive and unhealthy relationship with their own thinking.”
― David Foster Wallace

“Sometimes we motivate ourselves by thinking of what we want to become. Sometimes we motivate ourselves by thinking about who we don’t ever want to be again.”
– Shane Niemeyer
“You don’t get over addiction by stopping using. You recover by creating a new life where it’s easier to not use. If you don’t create a new life, then all the factors that brought you to your addiction will catch up with you again.”
– Anonymous
____________________________
(almost) Everything You Think You Know About Addiction is WRONG
What really causes addiction -- to everything from cocaine to smart-phones? And how can we overcome it? Johann Hari has seen our current methods fail firsthand, as he has watched loved ones struggle to manage their addictions. He started to wonder why we treat addicts the way we do -- and if there might be a better way. As he shares in this deeply personal talk, his questions took him around the world and unearthed some surprising and hopeful ways of thinking about an age-old problem.
Labels: Addiction hope Substance Abuse