Fearing Fear Itself: The Result 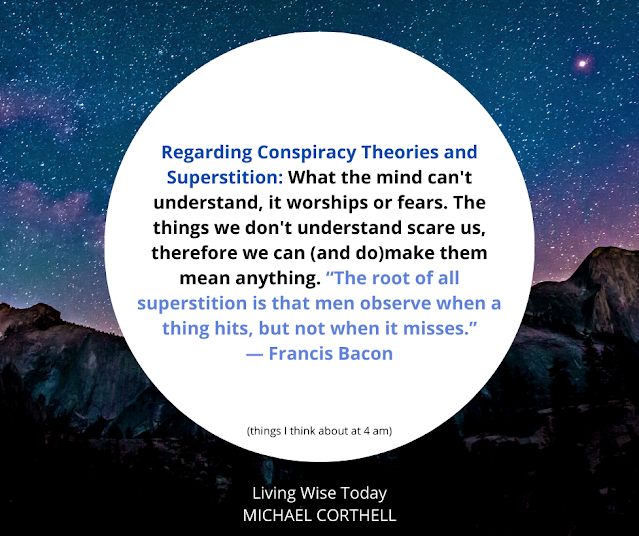 Why should people look for a conspiracy when stupidity can explain so much?

I highly recommend mixing healthy curiosity with discernment and critical thinking as a reality tonic.

“Indeed, to this day, I think if you blame everything on the government, you're not just wrong, you're being reckless. It's as silly as blaming everything on the Freemasons, or the Illuminati, or insert-bad-guy-here. But I do believe that someone must ask the hard questions, especially of our elected officials as well as powerful men who become members of so-called secret societies. Remember: Governments don't lie. People lie. And if you want the real story, you need to find out more about those people.”
― Brad Meltzer, History Decoded: The 10 Greatest Conspiracies of All Time
Fascinating: History Decoded explores fascinating, unexplained questions. Is Fort Knox empty? Why was Hitler so intent on capturing the Roman “Spear of Destiny”? What’s the government hiding in Area 51? Where did the Confederacy’s $19 million in gold and silver go at the end of the Civil War? And did Lee Harvey Oswald really act alone? Meltzer sifts through the evidence; weighs competing theories; separates what we know to be true with what’s still—and perhaps forever—unproved or unprovable; and in the end, decodes the mystery, arriving at the most likely solution. Along the way we meet Freemasons, Rosicrucians, Nazi propagandists, and the real DB Cooper.
Labels: Conspracy Theories Fear Superstition