How to Save the Animals, Save the Planet and Save Yourself 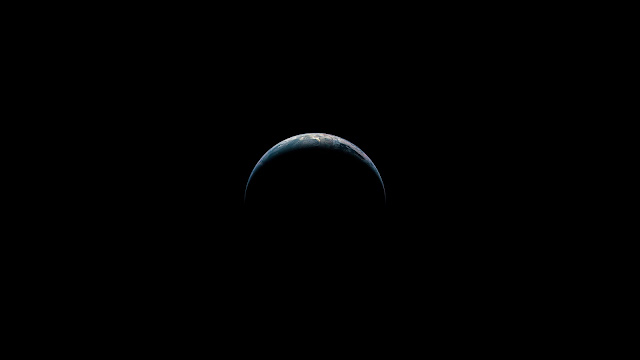 'Earthrise'
Presented by The Vegan Project

The human race is and has been for over a generation, in the middle of a revolutionary paradigm shift in consciousness, one that will only change our entire global civilization for the better - a New World.

Looking through history, it’s very clear that the world has undergone many of these shifts.  A paradigm shift is a fundamental change in approach or underlying assumptions. For example, when Pythagoras proposed that the Earth was round instead of flat, the foundation of science and people’s understanding of the world was completely changed. Similarly, when the Industrial Revolution took place there was a complete shift in manufacturing, lifestyle, and economics.
A paradigm shift will literally shake a society, or an entire civilization to its core, by making it veer off its current path, and driving it toward a new one. Though it might appear the opposite in the corporate-controlled mainstream news, it appears that the entire world is right in the middle of a global paradigm shift.

A major sign of this shift is that a significant percentage of the population is starting to see themselves as more than just individual people operating in isolation in the world, instead, they view themselves as a connected piece in the collective consciousness of the entire human race and Earth itself.
The Internet, along with the increased capacity for travel, has allowed people from all over the world to connect. So many parts of the global society have become interconnected and people are beginning to take notice of not only their own country but countries abroad. Millions of ordinary people are beginning to realize that when one suffers, all suffer and that when one thrives all should as well. That brings us to the economics of this paradigm shift, a Resource-Based Economy.
In a Resource-Based Economic System, all goods and services are available to all people without the need for means of exchange such as money, credits, barter, or any other means. For this to be achieved, all resources must be declared as the common heritage of all Earth’s inhabitants. Equipped with the latest scientific and technological marvels, humankind could reach extremely high productivity levels and create an abundance of resources. (see: The Venus Project, and Resourceism.com)

Veganism Will Play a Primary Role
Food and nutrition will be based on personal preference and taste, however, studies indicate that eating animals is detrimental to our health. This information is available for everyone to see. Through time and education, plus the production of synthetic proteins we will do away with killing animals for food and using them in any way. Indeed, it is already possible to have a solely plant-based diet that meets all nutritional needs. We can not outlaw what people eat, but we can outgrow the need for eating animal protein. During the transition to a better diet currently, we already have developed foods that taste and look just like the foods(meat) they like eating. (see: Live Be Vegan)
The Other Inconvenient Truth


by Jonathan Foley
Skyrocketing demand for food means that agriculture has become the largest driver of climate change, biodiversity loss, and environmental destruction. Jonathan Foley shows why we desperately need to begin "terraculture" -- farming for the whole planet.

A Resource-Based Economy is a system in which all goods, produces and services are available without the use of any system of debt or servitude like money, credits or barter. In this new world, all resources on Earth are the common heritage of everyone, not just a select few.

The premise upon which this system is based is that our planet is abundant in resources and our current practice of rationing resources through monetary methods is irrelevant and counter productive to humankind's survival.

Money is only important in a society when certain resources for survival must be rationed and the people accept money as an exchange medium for the scarce resources. Money is a social construct or convention. It is an agreement, so to speak. It is neither a natural resource nor does it represent one. It is not necessary for survival unless we have been conditioned to accept it as such and we have to the enrichment of a select few.

People, corporations and special interest groups are governed by laws that demand maximum profit wherever possible. These laws are inherent in the monetary system prevalent in most countries today, that is capitalism. (even in communist countries like China). The basic principles of capitalism demand exponential growth at all costs creating financial disasters like the Great Depression of the 1930's not only in the United States but globally, and the recent financial (bubble) crisis of 2008.

When forward-thinking people refer to 'resource-based economics' today, in a post-industrial context, they're usually talking about systems where global resources are managed in a manner similar to municipal utilities and as a result currency(money) becomes redundant. No one owns water for example, they only get money for managing it; purifying, packaging and transporting it.

Communities create facilities for its collection and distribution as a public utility. Imagine that all resources and many commodities were treated this same way and you can visualize part of the picture of what a resource based economy looks like.

Such systems are anticipated to evolve from global digital networked market systems that become 'commoditized' by the trends in decentralization of production. In other words, because production is local, markets stop trading in finished products and labor and start dealing in a broad spectrum of commodities in increasingly fractionalized unit volumes evolving toward just the Periodic Table (elements) plus energy.

Soon they become so efficient, as commodities markets tend to do if left to their own devices, that they come to 'know' in an algorithmic formula sense the full extent of world resources and demand their respective cycles and 'bandwidth', eliminating currency(money) as a means and use of market values by allowing resource values to be indexed relative to each other, and eliminate profit and speculation by compelling capitulation (the tendency of participants in a market to conform collectively to its trends) and driving the market toward equilibrium (balance).

(It is very important the two preceding paragraphs be clearly understood, because it is the core description of this type of economy. More information) 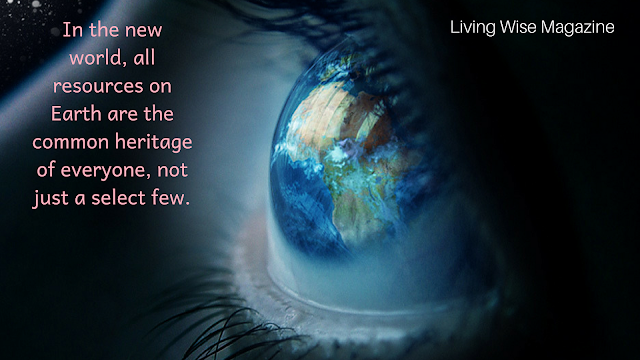 At this point the system stops being a market for resources and commodities and becomes an open Internet for them instead, forcing the releasing of individual control over resources and the management of their exploitation to the system itself as a world utility driven by demand. The result is a money-less society where all resources are free, (within reason), and distributed automatically in response to demand. This is what futurist Jacque Fresco has dubbed Cybernation; world resources managed as a global societal commons by a demand-driven computer-based world utility.

That is the basics of a resourced based economy in a nutshell. A version of this type of economic system must be perfected and adopted for humankind to thrive. There are two major down sides; moving toward implementation of the system without causing a global war and the management of the global economic system by super-computers(artificial intelligence). More on these two hindrances in upcoming articles. Additionally, there is a very strong spiritual component involved in the implementation and management of this system, a kind of 'tipping point' that must be achieved before the two obstacles can be overcome. See associated articles at: Living Wise Magazine.

The graphic at the bottom is our current economic system, at the top is the one that must replace it. 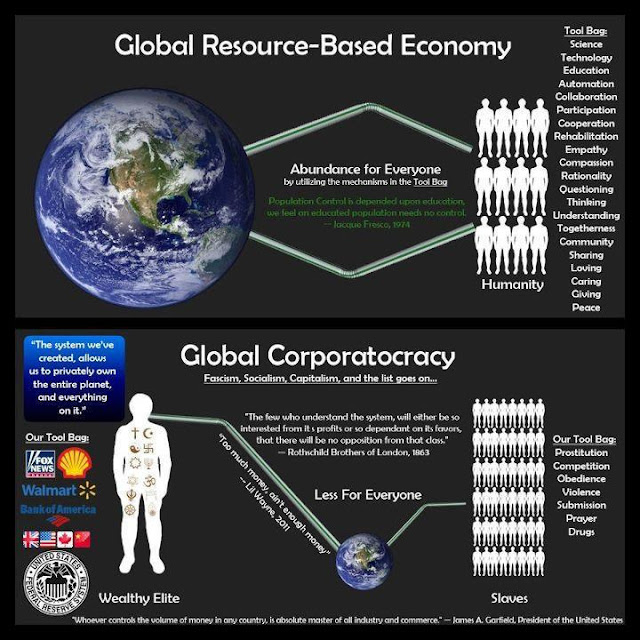