What the HELL is Carnism? 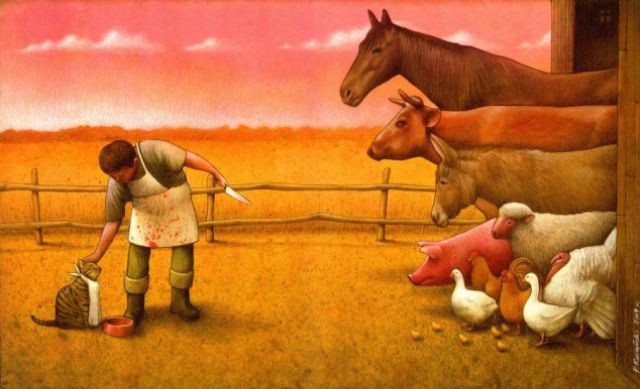 Carnism is the invisible belief system, or ideology, that
conditions people to eat certain animals and not others.
by Michael Corthell

It has been said that as long as there are slaughterhouses, there will be battlefields. Let me explain.

Carnism is a belief system or ideology. This ideology conditions folk to eat certain animals, but not others. It is essentially 'invisible' in all human cultures.  Carnism is the polar opposite of veganism. The 'carn' means flesh or meat and 'ism' refers to a belief system.

And because carnism is invisible, people rarely, if ever, realize that eating animals is a choice, rather than a given. In all meat-eating cultures around the world, people really don't think about why they eat some animals and not others, or why they eat meat at all. So then, when eating animals is not a necessity, which is the case for most people worldwide, then it is a choice – and choices always come from belief systems.

As long as we remain unaware of how carnism impacts our world, our health, and our mindsets, we won't be able to make our food choices freely – without awareness of a thing, there can be no free choice.

Carnism goes firmly against core human values, such as justice and compassion. The majority of people will not willingly support violence toward other sentient beings. This is how it works; carnism, like other violent belief systems, uses a group of defense mechanisms that confuse and actually distort our thoughts and block our natural God-given empathy and sympathetic feelings so that we act against our core values without even realizing what that we are doing so. In other words, carnism numbs us.

Carnistic defenses hide the contradictions between our values and behaviors so that we unknowingly make exceptions to what we would normally consider unethical.

Why is carnism so pervasive and ingrained? It is caused by denial: if we deny there is a problem, we don't have to do anything about it, do we? Denial is expressed mainly through the ideology of being 'invisible'. How does carnism stay invisible? It has gone unnamed; if a culture doesn't name it, it can't be questioned. Not only is carnism invisible, but its victims are also as well. Billions of farmed animals remain out of sight and therefore out of public awareness.

Our increasingly damaged environment. The exploited and often brutalized meat-packers and slaughterhouse workers. And we human beings, consumers who are at increased risk for some of the most serious diseases(cancer, heart disease, and many more) in the western world, who have been conditioned to turn off their hearts and minds when it comes to eating a living being's flesh.

Carnism mirrors other systems that promote oppression, such as racism, sexism, and heterosexism. While the reactions of each set of victims of an oppressive system will always be very personal, the systems are similar because the mindset and the mentality that enables the oppression to occur are exactly the same.

Back to my first paragraph, ''as long as there are slaughterhouses, there will be battlefields''. What does that mean? It simply means that if you abuse, and kill another sentient being, it becomes that much easier to kill human beings as well. For example, serial killers almost always start practicing their 'trade' by killing animals. It is a negative spiritual mindset.

Finally, cultivating compassion,  justice, and having a better world is not just about changing human behavior; it is about changing conscious mindsets so that no sentient being, human or nonhuman, are victims of oppression, torture, or murder. To create and manifest, a more compassionate, just society then, we must strive to include all forms of oppression and violence in our conscious awareness, including carnism.

To learn more about Carnism and Veganism visit The Vegan Project.


Carnism: Do You Love Animals?

Our culture tells us to love dogs, eat pigs, and wear cows. That premise is upside down. This video illustrates how Carnism is hurting humanity, the planet, and our furry friends.