Most people who do not succeed in life have one glaring trait: they are negative minded and they know every reason for their failures. They have what they think are absolute, air-tight alibis to explain their own lack of achievement.

Some of these alibis are cool and even entertaining, and a few of them are even reasonable, ones that can be justified by facts. But you can't spend alibis. Excuses don't pay the bills. The world loves a winner, the one who makes a difference, the one who can get the job done. People tend to shy away from the excuse-makers because of their dishonesty and unreliability.

''It is better to offer no excuse than a bad one.''
—George Washington

Below is an extensive list of the most commonly used alibis. As you read these, be honest with yourself. Identify how many of these alibis and excuses you own. 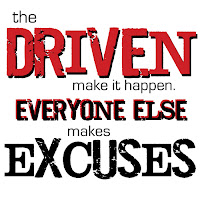 This may be a negative exercise, but it is a necessary one. The good news is that with your own determination, and desire for a positive, productive life, you can negate every single one of these alibis and you will never have to be trapped into making any of these foolish excuses again.

The BIG 'IF' Factors

That's quite an amazing list—almost five dozen reasons for NOT succeeding, however, there is one last IF, it is a realization and hopefully it will be that proverbial light bulb going off in your head, that ''ah ha'' moment for many of you trapped by negativity and self-doubt. It is:

IF I had the courage to see myself as I really am, I would find out what is wrong with me and change.

Plato may have stated it most succinctly when he said, ''The first and best victory is to conquer self; to be conquered by self is, of all things the most shameful and vile.''

You will find that in a positive sense it really is all about you when you finally wake up and discover that most of the defects and shortcomings that you see in others, are but a reflection of your own flawed character.

Stop worrying about and blaming others. IF, you want a good, healthy, happy and productive life, get to it. The only person that can hold you back is you.
_______________

In this funny and blunt talk, Larry Smith pulls no punches when he calls out the absurd excuses people invent when they fail to pursue their passions.

Why you should listen

Larry Smith is a professor of economics at the University of Waterloo. A well-known storyteller and advocate for youth leadership, he has also mentored many of his students on start-up business management and career development. The most notable start-up he advised in its infancy is Research in Motion (RIM), maker of the BlackBerry.

"What you see in the TED Talk is essentially thirty years of Smith’s frustrations reaching a boiling point," wrote Carmine Gallo in Forbes. ''Wasted talent is a waste I cannot stand,' Smith told me."