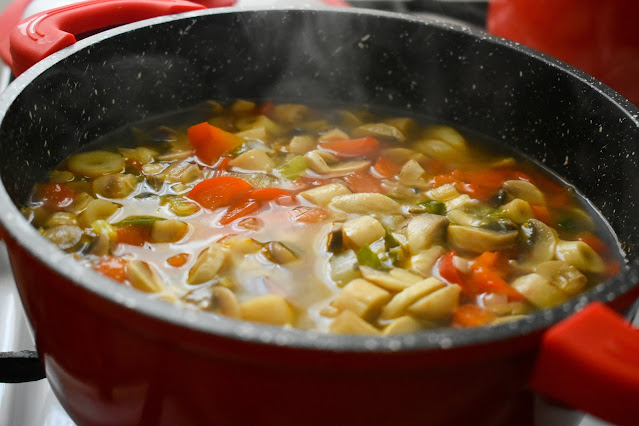 A few years ago when I was single, it was my habit of just opening a can of Progresso soup for supper. I did this far too often out of laziness. But on this night it kinda sorta paid off because it gave me some cosmic insight.

A night or two before I had watched a documentary on the Universe. Much of the film had to do with the sheer scale of it and all the different galaxies and structures within those galaxies - black holes, nebula star incubators, and such.

In the time after and before I was preparing my soup supper, I was thinking a lot about what I had learned in watching the documentary. My first question was; ''Is the Universe one thing?'' And the second one, ''Do the laws of physics and chemistry apply uniformly, everywhere in the Universe?'' And lastly, ''Are there life-forms spread uniformly throughout the Universe?''

So, I'm stirring my soup. The burner's on low so as not to burn the feast. I take my time because it forces me to focus and meditate on things. I'm 'Zenfully' cooking. (I do this washing dishes as well.)

I'm stirring, and I'm stirring. I'm looking down at the soup. I'm stirring and each time I make a revolution with the spoon I look and the pattern of the soup's ingredients changes - a different 'snapshot' of the soup is revealed so to speak. The soup is the same, but with a different look with each 'orbit' of the spoon. I am mesmerized. I then start to taste the rapidly warming soup. "Mmmm tastes good,'' I say to myself.

I dish up the now steaming deluxe deliciousness and sit down in front of the TV. (typical single man behavior) I'm nearly done when the epiphany strikes. A true insight into the nature of the Universe.

The Universe that makes sense to me is indeed, 'one thing.' Like the bowl of soup is made up of a host of ingredients and its Universal laws all 'taste' that same even though the spot where you're standing within the Universe looks different or unique.

Simplistic? But it works for me. Cosmic soup. Pass me the Saltines.

So what's next? ''About those aliens, what do they look like?'' I think to myself.

Now from the simplistic to something that's a little more in-depth and fun...

TRUE Limits Of Humanity – The Final Border We Will Never Cross
Is there a border we will never cross? Are there places we will never reach, no matter how hard we try? It turns out, there are. Even with sci-fi technology, we are trapped in a limited pocket of the Universe and the finite stuff within it. How much universe is there for us and how far can we go?