Are There Spiritual and Religious Reasons Not to Eat Animals? 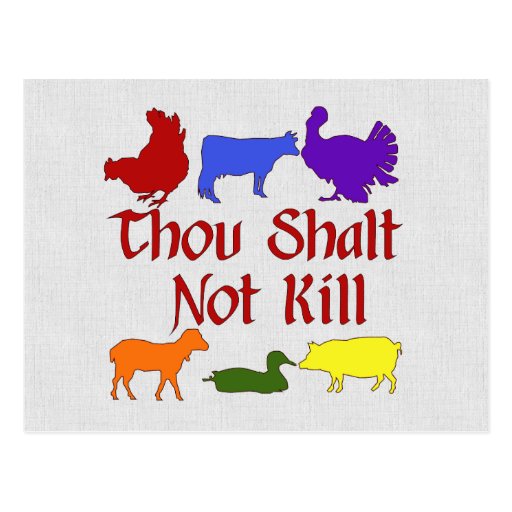 What is the number one reason not to eat animals?

The number one command in Christianity is to love one another. And the Golden Rule is a precept of all major religions. So then, to not kill and consume any living creature is of course by extension, loving them. There is no escaping this fact. This is the number one reason why we should not eat animals.
If you want a spiritual reason to be vegan let's look a little deeper., read on... 'How did the western world get the idea that it is perfectly alright to kill animals? According to Genesis, the first book of the Bible, dominion over animals was granted to Adam and Eve, but that did not extend to killing animals.
The food was plant-based. (See Genesis 1:29) After Adam and Eve were removed from the Garden of Eden, God reportedly provided them with animal skins, but it was not stated that the animals were killed expressly for the purpose of clothing or any other purpose.
In later generations, we read that the animal sacrifice by Abel was preferred to the plant-based sacrifice of his brother Cain. And later on still, after Noah and the flood, we read that God made a second covenant with him, allowing people to not only sacrifice animals for the remission of sin but also to eat animals. (see: Genesis 3)

A major influence on the reasons not to eat meat interestingly came from paganism. Greek philosophers had an evenly matched debate on whether it was alright to kill animals. The most influential of the anti-animal views was that of the ancient Stoics, who started around 300 BC. They had a striking and in many ways a very humane view. All rational beings are bound together by bonds of attachment and owe each other justice.... but in the end, the ancient Greeks decided it was permissible to eat animals because they felt they are 'lesser' beings.

What does veganism say about the reasons for not eating animals?

Food writer Michael Pollan hinted at the number one reason in the planetary health diet when he stated 2008, a simple seven-word rule: “Eat food. Not too much. Mostly plants.” But if you want to have the maximum impact on fighting the climate and wildlife crisis, then it is going to have to be ALL plants.

How do some religious folks push back on the vegan message?

The following is an exchange from a vegan internet forum. The writer, 'John' is an Evangelical Christian. The following are some of his responses to a post on the topic of the immorality of eating animals and why the Golden rule and thou shalt not kill applies to all living creature not just human animals:

John: ''When these posts first started appearing on my feed, I considered you unfamiliar with scripture. Over time I have found that not to be so. Instead, you are very well-read and unfortunately have developed your own version of truth that violated the scriptures.
The sad part of all of this is that although you reject scripture as written (the words of scripture have meaning), you reject the true meanings of those words and distort them with your own. You are on very dangerous ground and need to repent. You will stand in front of the author of scripture soon and give account for your choices.''

My response:  ''Forcing Christianity on folks by saying they will go to hell if they don't repent is evil on its face. Your view that when you die and your soul goes to heaven or hell is not found anywhere in the Old Testament and it is not what Jesus taught either.''
Now as for evangelizing. It is a form of neo-colonialism. Today it's not *territorial like its predecessor but it definitely invades, destroys, and corrupts not only the different ideologies of developing nations but also their cultures and practices. (*Are you familiar with 'The Trail of Tears'?)
The forced evangelism of the people in 3rd world countries is a practice that was present during the colonial era and even 500 years later the idea that the people ¨Need Jesus¨ or ¨Need baptism¨(since evangelicals(and Mormons) believe they are the only means of salvation) is still present in today's missionary evangelists. It is abusive and again it is not what Jesus taught.

The bottom line is, neo-colonialism and evangelism as practiced violated the great commandments of respecting God and loving your neighbor (or the Golden Rule), as described by Jesus in the New Testament in Matthew 22:35-40, Mark 12:28-34, and in answer to him in Luke 10:27.
Most Christian denominations consider these two commandments to be the core of Christianity but many fail to understand their true meaning.
*forcing an individual or group of people to believe in something is not loving them, it is manipulative abuse of them.''
This is just one small sample of the religious anti-vegan arguments that I've dealt with on The Vegan Project and elsewhere. There have been hundreds more over the years.

Why is the Golden Rule at the heart of Veganism?

All vegans value the lives of all creatures and extend to them all the compassion, kindness, and justice they are due via the Golden Rule. Vegans see animals as free beings not our slaves or as commodities to be bought and sold.

The number one precept of veganism says that we are not to harm any animal in any way because we ourselves do not wish to be harmed. This is an example of the Golden Rule exactly as it should be applied.

Vegans live in balance with and according to an equitable, ethical relationship with nature and between human and nonhuman animals. They recognize that the production of animal-based foods and all other animal products involves the taking of innocent life. The cruelty and death of animal agriculture violate the number one command in all major world religions to 'love your neighbor'.
____________

Why Are So Many Israelis/Jews Vegan?

Rabbi Akiva Gersh aka The Vegan Rabbi and author of Becoming Israeli joins me as we discuss the Jewish roots of veganism, animal rights, and the environment in Jewish tradition and Halacha. We also went into depth as to why so many Israelis become vegan.
Labels: animal rights golden rule Thou Shalt Not Kill veganism