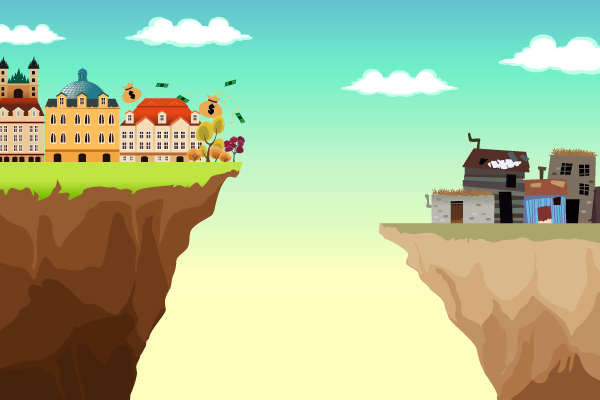 Robert Sapolsky on Socio-Economic Inequality: The Haves and Have Nots
Summary: People have known for a long time that socioeconomic status correlates with all sorts of measures of health.
In the United States, you look at the five percent wealthiest and the five percent poorest and there is a 25-year difference in life expectancy. That is dramatic, and you find that in every westernized society. [But] not as extreme as in the US but it is there.
There was a simple explanation that poor people cannot afford to go to the doctor, but if you look at countries with universal health care and there is that same relationship between economic status and health. So, then you say poor people are living next door to toxic waste dumps they're living in dangerous neighborhoods they don't have the money to go to health clubs they don't have the money to buy healthy foods.
If you do careful studies and lifestyle risk factors and protective factors only explain about one-third of the variability. The subjective socioeconomic status is a better predictor, so it’s not being poor that's bad for your health, it is feeling poor.
The easiest way for a society to make you feel poor is to surround you with all the things that you do not have and to show you the inequality in your face every single day.
It’s taking the people who don't have enough and reminding them over and over again. What we see insofar as poverty as a predictor of poor health is statistically mediated by subjectively feeling poor which is statistically mediated by the degree of income inequality surrounding someone.
What income inequality does it makes for a society in which people don't trust each other in which people feel like they don't have peers in which people feel like they have no voice they have no efficacy.
Sociologists have this term social capital the amount of trust the number of emotional reserves that people have. When societies are unequal social capital goes down the drain. The best demonstration of that is when you look at what diseases are most sensitive to socioeconomic status inequality. It's the diseases that are most centrally sensitive to stress.
The stress-related diseases get worse in an unequal society. When inequality increases everybody's health gets worse. The poor's health gets much worse, the middle class moderately worse but even for the wealthy their health gets a little bit worse.
As inequality goes they have to be more and more stressed about trying to keep the outside world away from them They have to put that much more effort into building walls between themselves and the outside world. That's stressful in and of itself so even if you don't care about the poor if you only care about the wealthy, inequality isn't good for the wealthy's health either.
Labels: Health socio-economic ineqaulity Sociology