What is Cosmic Consciousness? (in 300 words or less) 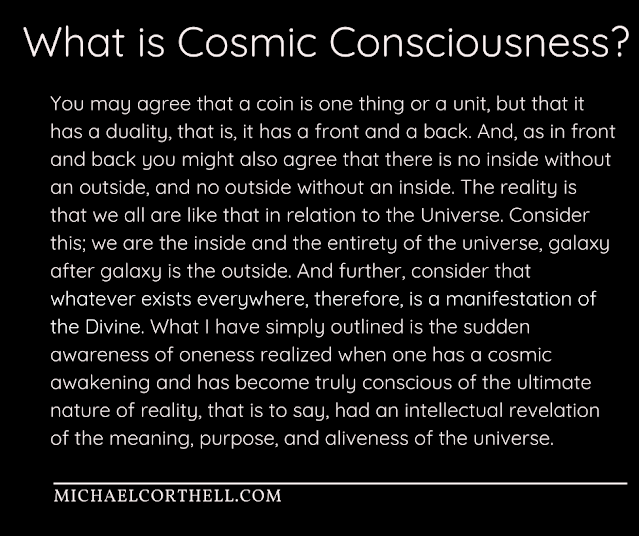 You may agree that a coin is one thing or a unit, but that it has a duality, that is, it has a front and a back. And, as in front and back you might also agree that there is no inside without an outside, and no outside without an inside. The reality is that we all are like that in relation to the Universe. Consider this; we are the inside and the entirety of the universe, galaxy after galaxy is the outside. And further, consider that whatever exists everywhere, therefore, is a manifestation of the Divine.

What I have simply outlined is the *sudden awareness of oneness realized when one has a cosmic awakening and has become truly conscious of the ultimate nature of reality, that is to say, had an intellectual revelation of the meaning, purpose, and aliveness of the universe.

*Excerpt: ''Whether long or short in peak duration, these intense psychological shifts in consciousness often lead to long-lasting and even permanent changes to the subject's sense of self and of the world around them (Neumann and Campbell, 1964; Taylor and Egeto-Szabo, 2017), often from an experience of fragmentation of purpose and meaning, to loving engagement with life (Dunnington, 2011). These experiences are therefore considered deeply healing. Some of the cognitive and behavioural shifts linked to these experiences include: increased empathy, compassion, gratitude, openness, trust, altruism, curiosity, awareness, creativity, authenticity, integrity, a sense of higher purpose and meaning in life, a sense of virtuous mission or selfless service towards humanity, a sense of being reborn and liberated from past attitudes and beliefs, a sense of devotion to love-based values, and a rejection of “religiousness” and materialistic lifestyles (Cook, 2004; McClintock et al., 2016; Taylor and Egeto-Szabo, 2017; McGee, 2020). These deep shifts may lead to radical changes in religious and philosophical views, relationships, and career paths (Taylor and Egeto-Szabo, 2017).

''This man never ceases to make me think about how I perceive the universe and my place in it. His explanations provide clarity. They are simple but profound. Beautiful. Amazing. Wonderful. His vision is ecocentric. All is One and One is all. Existence is a beautiful, joyous dance.''
- Charles Sullivan
Alan Watts Lectures | The Void
Labels: cosmic consciousness satori