The Swinging Pendulum of Yin and the Yang 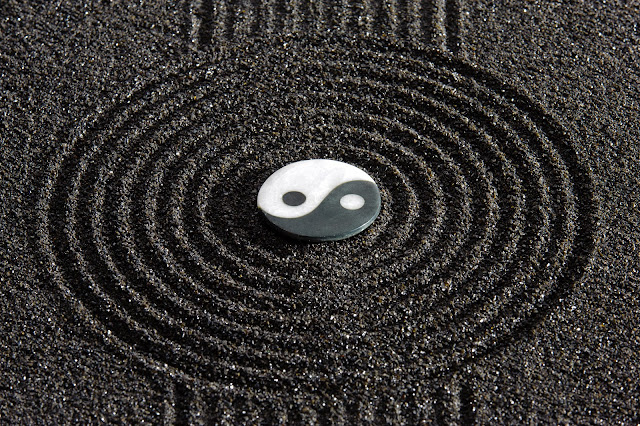 Yin/Yang Symbol
by Michael Corthell
In ancient Chinese philosophy, yin and yang ("dark-light", "negative-positive") is a philosophical conceptualization that describes how obviously opposite or contrary forces may actually be complementary, interconnected, and interdependent in the natural world, and how they may give rise to each other as one thing like a coin or a living being has a front and back that cannot be separated.

In Chinese cosmology, the One( the Universe) creates itself out of a primary soup of material energy, organized into the cycles(waves) of Yin and Yang and it is then formed into objects and living beings.
Yin is the receptive and Yang the active principle, seen in all forms of change and difference such as the annual cycle (winter and summer), the landscape (north-facing shade and south-facing brightness), sexuality (female and male), and the formation of both men and women as manifestations of the One.

In Taoist metaphysics, distinctions between good and bad, along with other dichotomous moral judgments, are perceptual, not real; so, the duality of yin and yang is an indivisible whole. In the ethics of Confucianism on the other hand, most notably in the philosophy of Dong Zhongshu, a moral dimension is attached to the idea of yin and yang.

It is impossible to talk about yin or yang without some reference to the opposite since yin and yang are bound together as parts of a mutual whole (for example, there cannot be the bottom of the foot without the top). A way to illustrate this idea is to postulate the notion of a race with only women or only men; this race would disappear in a single generation.
Yet, women and men together create new generations that allow the race they together create to survive.
Yin and yang transform each other: like an undertow in the ocean, every advance is complemented by a retreat, and every rise transforms into a fall. Thus, a seed will sprout from the earth and grow upwards towards the sky—an intrinsical yang movement. Then, when it reaches its full potential height, it will fall. Also, the growth of the top seeks light, while roots grow in darkness. 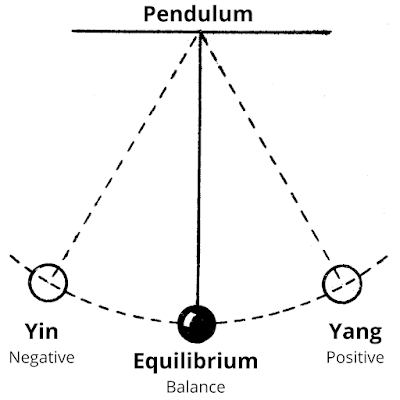 I would like to note that this oscillation or swing never stops to achieve balance. There is always a frequency of the swing, a vibration.
Yin characteristics: passive, negative, darkness, earth, north slope, cloudy, water, softness, female, moisture, night-time, downward seeking, slowness, consuming, cold, odd numbers, and docile aspects of things.

A Time for Everything: Yin and Yang in Judo-Christian Theology

The Yin and Yang by Alan Watts

The yin and yang pattern is the essence of binary code, which solely consists of ‘ones’ and ‘zeros’. As philosopher Alan Watts puts it: ''You could say that all your perceptions, in all their variety and all their color, are made up of a vast composite of little ‘yeses’ and little ‘nos’.''
Labels: binary code black white yang yin