The Wings of Time are Black and White: Quantum Physics and Oneness Explained 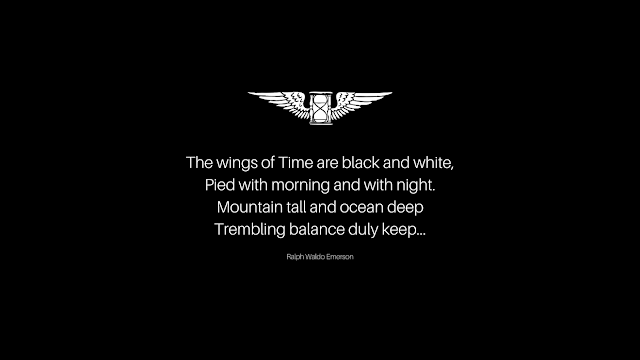 Compensation, which is difficult to read at first because of its Victorian language, inspired me to discover more about existential philosophy. It led me to many foundational, basic discoveries in both science and religion. These studies in turn have led me to a simple discovery(and acceptance) of what the Universe truly is: pure consciousness.

What Emerson is describing in the first four lines of his opening poem is, as I said, quantum mechanics:

The wings of Time are black and white

(this refers to both the duality of waveform vibrational energy and the dual nature of philosophical/religious concepts such as the yin and yang nature and its symbol. A checkerboard also symbolizes this duality. The 'wings' that carry time are the quanta that makeup consciousness and awareness.)

Pied with morning and with night

(first 'pied' means:  two or more colors in blotches. So, time is marked or measured by day and night, or darkness and light.)

(Here Emerson is symbolically describing the top and bottom of a wave(crest and trough).

(this line is describing the vibration of a quantum)

These few lines in the poem succinctly outline the foundational operation of the Universe, but I have to go further and say that in my opinion, the quanta are what thoughts(and dreams) are made of, that is to say at the foundational level they are conscious awareness itself or God.

This explanation I suppose is as simple as one can make it and that is the whole idea. A quantum is the first, and the simplest building block, and everything gets more complex from there on a quantum, a photon, an electron, an atom, an element,a molecule, a star...and a galaxy.

Below is the full lead into Essay: Compensation (1841) and a brief video at the bottom that will offer more insight into the strange and bizarre Quantum World.

The wings of Time are black and white,
Pied with morning and with night.
Mountain tall and ocean deep
Trembling balance duly keep.
In changing moon, in tidal wave,
Glows the feud of Want and Have.
Gauge of more and less through space
Electric star and pencil plays.
The lonely Earth amid the balls
That hurry through the eternal halls,
A makeweight flying to the void,
Supplemental asteroid,
Or compensatory spark,
Shoots across the neutral Dark.

Man's the elm, and Wealth the vine;
Stanch and strong the tendrils twine:
Though the frail ringlets thee deceive,
None from its stock that vine can reave.
Fear not, then, thou child infirm,
There's no god dare wrong a worm.
Laurel crowns cleave to deserts,
And power to him who power exerts;
Hast not thy share? On winged feet,
Lo! it rushes thee to meet;
And all that Nature made thy own,
Floating in air or pent in stone,
Will rive the hills and swim the sea,
And, like thy shadow, follow thee.
>>> Full Essay
________________
If You Don't Understand Quantum Physics, Watch This!
A simple and clear explanation of all the important features of quantum physics that you need to know.
I have spent a lot of time thinking about how best to explain quantum physics and this is the result of all my hours of pondering, and I’m really happy with how it turned out. I decided to just explain it as it actually is, rather than rely on analogies. The video explains the quantum wavefunction, particle-wave duality, the measurement problem, the double-slit experiment, superposition, entanglement, quantum tunneling, the Heisenberg uncertainty principle, and energy quantization.
[The absolute bottom line? Everything is connected. All is One. - Mike]
Labels: emerson Oneness quantum mechanics