Life Lessons Taught in The Wizard of Oz 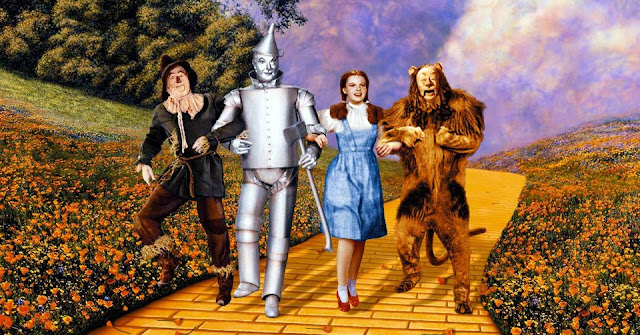 I love this story and watch the movie every year right around my birthday which is in December. It kicks off the Christmas movie marathon for me. (Including, A Christmas Carol, It's a Wonderful Life, and about a dozen more) To commemorate the 60th year I've viewed this film (I started watching it when I was ten years old!) I've written a brief summary analysis of it. It's my opinion of course, but I think you'll find when thinking about it, especially while watching the movie that you'll agree with me. We're off...
by Michael Corthell

''Oz never did give nothing to the Tin Man. That he didn't, didn't already have. And Cause never was the reason for the evening. Or the tropic of Sir Galahad.''
- Dewey Bunnell, Tin Man

Many of us think by running away from negative situations, we will be free of them, but in reality, the very same situations confront us over and over wherever we go. Let's take a look at The Wizard of Oz story keeping that in mind.
The star of the film is a teenage girl named Dorothy who is dissatisfied with her life and laments, "There is somewhere, a wonderful place high above the skies where everybody is happy and no one is ever sad or mean and then sings ''Somewhere over the Rainbow" How she would love to be there!

She then becomes terrified because a mean woman in her town comes to take away her dog, Toto because Toto bit her.  Her Auntie Em and Uncle Henry, say that Miss Gulch is within her rights under the law and let Toto be taken away. Toto escapes. She and Toto run away.
On the road, they meet Professor Marvel who looks into his crystal ball and tells Dorothy that her Auntie Em is sick with worry because she can't find her. Dorothy decides that she must return home, but a tornado suddenly appears, and she and Toto are lifted up, high in the sky, eventually landing in the land of Oz.
Everything seems wonderful at first, but soon she has the same set of experiences. The mean old woman Miss Gulch has now turned into the horrible Wicked Witch of the West and is still trying to get Toto away from her. How she wishes she could be back in Kansas.
She is told by Glenda, the Good Witch of the North to follow the yellow brick road and find the Wizard of Oz. She says that he is all-powerful and will grant her request to go home to Kansas.
She starts off to find his palace in Emerald City. On the way, she meets a scarecrow. He is also unhappy because he hasn't got a brain. She then meets a man made of tin, who is also unhappy because he doesn't have a heart. Then she meets a lion who is also unhappy because he thinks he lacks courage. She cheers them up by saying, "We'll all go see the Wizard of Oz and he'll give what we want," the scarecrow a brain, the tin man a heart, and the lion courage.
On the way, they encounter dangerous and scary situations, because the Wicked Witch is determined to capture Dorothy and take away Toto and the ruby slippers which protect her. At last, they reach Emerald City where the Wizard of Oz rules his kingdom. They ask for an audience but are told no one has ever seen the Wizard of Oz. But through the influence of the good witch of the North, they enter Oz's inner sanctum.
There they discover the Wizard is just a fake, just like the fake magician Professor Marvel from Dorothy's hometown in Kansas. They are all dejected and upset because their desires can't be granted at first because they must take the Wicked Witch's broom. They get the broom after Dorothy accidentally kills the witch they come back to see the Wizard. He tells them to come back tomorrow. Toto exposes him as a fraud, The man behind the curtain. Then the wizard sets things right. The scarecrow realizes that he has a brain he had to decide what to do in the experiences he encountered on the way to Oz, and the tin man finds he has a heart because he loves Dorothy, and the lion realized he was indeed courageous because he had to show courage on his way to Oz.
The Good Witch of the North then says to Dorothy, "What have you learned from your experiences?" and Dorothy replies, "I have learned that my heart's desire is in my own home and in my own front yard." so Dorothy taps her heels together three times and the good witch waves her wand, and Dorothy is at home again. She wakes up and finds that the scarecrow, the tin man, and the lion are the men who work on her uncle's farm...and the Wizard was Professor Marvel. They are so glad to have her back.
One allegorical or symbolic lesson (among many <<< you'll find this VERY interesting!) this story teaches is that if you run away from your problems they will run after you and that problems must be faced if they are to be resolved.
Another and perhaps the most important lesson the movie teaches is a spiritual one. It is that all answers come from within, because God, (symbolized by The Wizard), does not reside externally in some outside place (palace) or heaven, he and of course heaven reside within us all.
Therefore, we don't have to go looking for him here there, and everywhere. He has been inside us all along. That is why all answers to our questions about who we are, what our true character is, and what we are to do in life come from within.
_________

Labels: Philosophy the wizard of oz