January 6th was the Price for Two Failed Impeachment Convictions 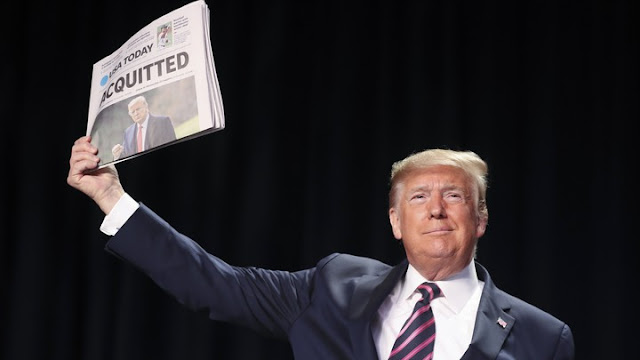 by Michael Corthell
(This was written on January 6, 2021 as the insurrection was unfolding at the Capitol)

When the Senate failed to remove him last year, it all but guaranteed that Trump would try to overturn the election. (for example, as I write this on January 6, 2021, he just sent the following tweets:
''The States want to redo their votes. They found out they voted on a FRAUD. Legislatures never approved. Let them do it. BE STRONG!''
''They just happened to find 50,000 ballots late last night. The USA is embarrassed by fools. Our Election Process is worse than that of third world countries!''
''THE REPUBLICAN PARTY AND, MORE IMPORTANTLY, OUR COUNTRY, NEEDS THE PRESIDENCY MORE THAN EVER BEFORE - THE POWER OF THE VETO. STAY STRONG!''
''States want to correct their votes, which they now know were based on irregularities and fraud, plus corrupt process never received legislative approval. All Mike Pence has to do is send them back to the States, AND WE WIN. Do it Mike, this is a time for extreme courage!''
''If Vice President Mike Pence comes through for us, we will win the Presidency. Many States want to decertify the mistake they made in certifying incorrect & even fraudulent numbers in a process NOT approved by their State Legislatures (which it must be). Mike can send it back!''

During his two impeachments, Trump’s critics, including me, said emphatically that if he were not removed in the Senate trial, he would feel emboldened to commit similar offenses over and over again. Trump’s current, brazen attempt at a bloodless coup is the price of the Senate’s failure.

Trump won't get away with the coup attempt because it is highly unlikely that he can do anything to prevent Biden from becoming president on January 20. But he will probably get away with not facing any criminal charges for his attempted subversion of the Constitution, which will sadly do little to deter any future authoritarian presidents. (this may not be true as I edit this on October 20, 2022)

The damage to our democracy by Trump, and what he is doing right now will continue for years or maybe even decades. Again, future corrupt politicians will try to use the same methods to try to overturn elections, you can count on that.(I guess I was right about that, unforntunately)

Meanwhile, the fraudulent claims by Trump and his enablers will do lasting damage to voters' faith in free and fair elections, which will damage our democracy further.

All of this chaos could and should have been prevented.
As Susan Collins said, ''That's a pretty big lesson."
Labels: Election Impeachment Trump